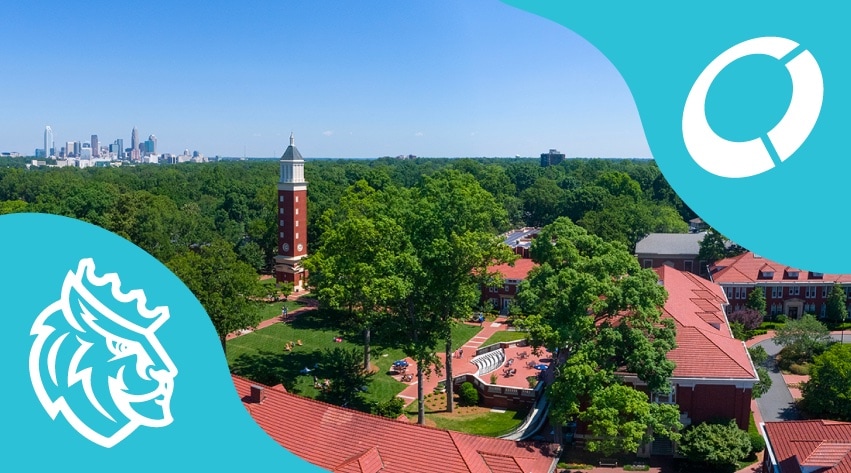 Competitor is proud of the relationship we have had with the Queens University of Charlotte Swimming and Diving teams since 2013. Led by Coach Jeff Dugdale, the Royals’ swim program has enjoyed tremendous success over the past 12+ years of his career. Most recently, both the men’s and women’s swimming programs emerged victorious at the 2022 NCAA Division II Swimming & Diving Championships securing their seventh straight title each.

Among the first initiatives between Competitor and the Queens program in 2013 was the development of gold-colored lane lines to help them represent their school colors in the pool. Since that time the connection with Queens and Coach Jeff Dugdale has continued to strengthen with the program helping to test new Competitor products, including Stor-Reels, Lane Line Disconnects, and Pace Clocks.

A native of Kenosha, Wis., Jeff Dugdale took over the reins of the Queens University of Charlotte Men’s and Women’s Swimming in the summer of 2010. Prior to joining the Royals, he assisted Head Coach David Marsh of SwimMAC Carolina with all aspects of running Team Elite whose members include Olympian Cullen Jones and record holders Nick Brunelli, Nick Thoman, and Josh Schneider.

A friend of Competitor, Jeff recently sat down with us for a chat about his professional career, his life outside of the pool, and his advice for young coaches just starting their careers.

What is your greatest professional achievement?

What I am most proud of is the ability to recognize a system that worked at Auburn with David Marsh and then implement it with a few adjustments to the unique qualities of Queens and get the same results. I use this example often to demonstrate that efficient and effective leadership  is not to reinvent the wheel but to take and maximize what is working. I am very proud of this.

What legacy do you hope to leave behind?

My goal was to build an aquatic-centric university that valued the Olympic Games and the process behind that movement. The development process includes leveraging teams, conference championships, and NCAA championships. Still, those are secondary to what great looks like and that is the visibility of having swimmers represent their country and raise their flag.

What do you do for fun?

Fun for me is cooking, watching my two girls thrive, and taking long drives to new places with my wife.

What advice would you pass along to a young coach?

No matter what good looks like, be patient and work smart, and avoid insulting the process towards great.

What are you most proud of?

I am most proud of the family that we have built in Queens.  They communicate early and often, they trust enough to share successes and failures, they are eager to support each other through time, talent or treasure and they say I love you before hanging up.  That is family.

Tell us about your family.

I have a 24-year-old daughter, Sydney, a Queens graduate who is thriving in the corporate world. I love our conversations about work and about adulting, and I can’t help but smile at how independent she is. I can’t wait to continue to be her biggest cheerleader in life.

Colby, my 21-year-old daughter, will be a Senior this year at Queens. She has played in three Final Four championships in lacrosse for Queens, finishing 2nd her sophomore year.  Christine and I love watching her and her team play and have enjoyed her growth this summer while interning in Human Resources.

My wife, Christine, is the head of global human resources for a company in Charlotte that has headquarters in Switzerland. I enjoy the end of the day when we can talk about the many cultures we impact either through expansion, recruiting, celebration, etc… Christine and I love to laugh, we are foodies and are so proud of the support system that we have built around us.

If you could travel anywhere, where would it be?

What are 3 words you would use with your team to teach and guide them?

About Competitor Since 1968, Competitor® has been the leader in the production of racing lanes and other swim products for competitions around the world. Competitor®  lane lines have been used in countless NCAA Championships, as well as 10 of the past 13 Olympic Games. Molded and assembled using the U.S. – made components, Competitor®  lane lines are durable, easy to set up, and are sold through distributors and dealers worldwide.