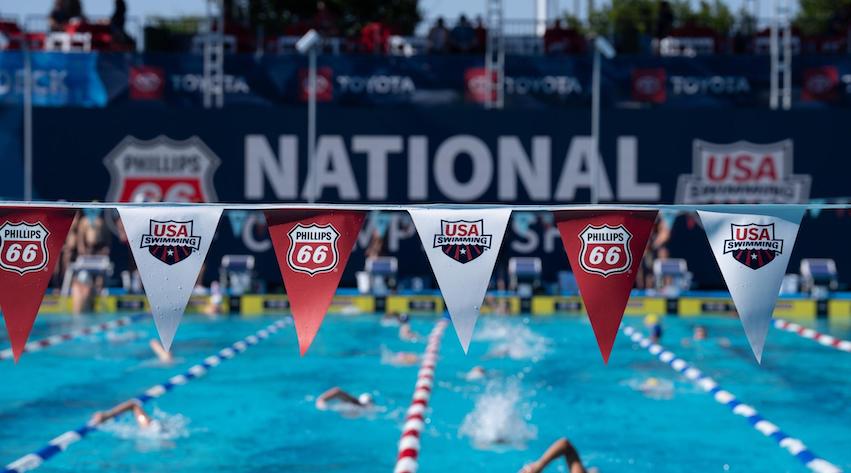 As the Official Lane Provider for USA Swimming, Competitor was proud to once again have our lane lines in place for the Phillips 66 National Championships. More than 600 athletes took to the pool at the national meet that took place in Irvine, Calif., from July 26-30.

“It truly makes a statement when you see our lanes at elite-level competitions, “ notes Competitor President, Brad Underwood. “We take great pride in making sure coaches and swimmers have the best lanes by their side at the USA Swimming meets.”

The lane lines used in the National Championships will now be donated to clubs in need of lane lines across the country through the “Competitor in the Community” program. “This program is a small way that Competitor gives back to communities and the sport of swimming,” says Competitor Vice President Kristen Linehan Omli.

Each lane line is made with flow-through technology that eliminates dead spots and water bounce-back. We have been a proud supporter of USA Swimming since 2014 and will continue to serve as the Official Lane Provider for USA Swimming through 2025. As the leader in racing lane technology, Competitor lane lines have also been used in 10 of the past 14 Olympic Games.

Since 1968, Competitor® has been the leader in the production of racing lanes and other swim products for competitions around the world. Competitor®  lane lines have been used in countless NCAA Championships, as well as 10 of the past 13 Olympic Games. Molded and assembled using the U.S. – made components, Competitor®  lane lines are durable, easy to set up, and are sold through distributors and dealers worldwide.